“I don’t know if I like less the ad or the car.” Thus, with this display of disdain and contempt, the protagonist of the famous television series Mad Men (Don Draper) refers to a press announcement created by a competitor advertising agency. His is an attitude of resistance to something new and different that he would never have thought of. But … what announcement and what car are we talking about? It is a full page advertisement, in black and white, where we can see the photo of the car in question occupying three quarters of the space and titled with a word not at all identifying: LEMON. 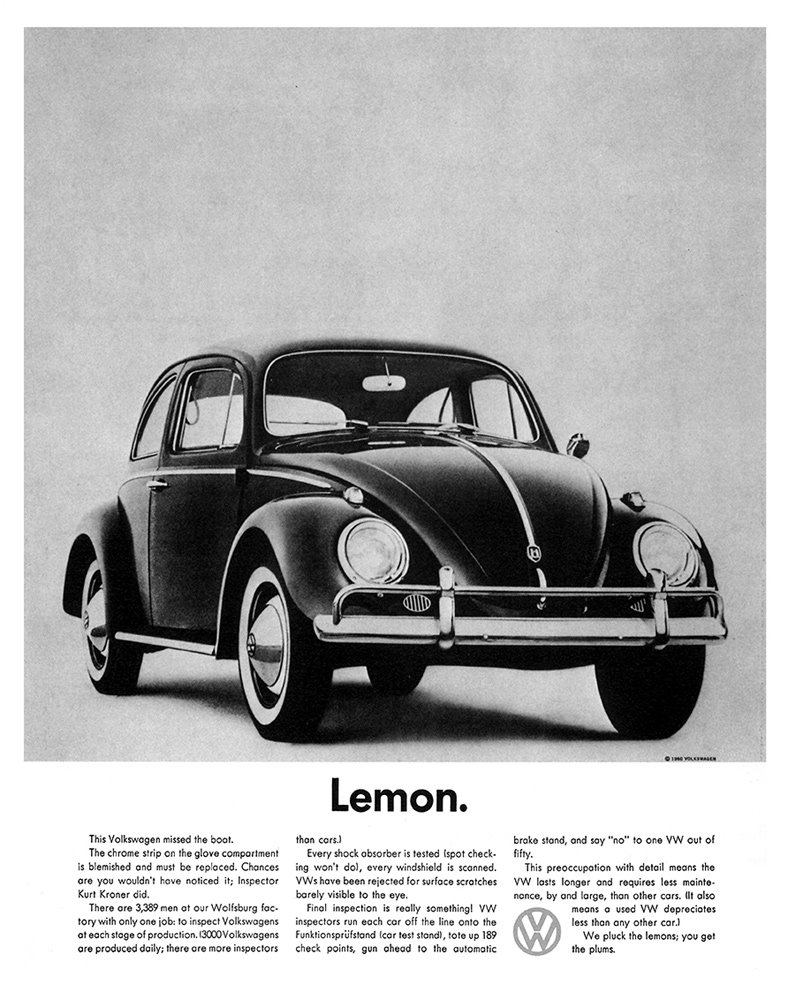 The photograph is accompanied by a frankly strange text for an advertisement, it starts like this: “This car missed the start“. The term lemon refers to a phrase with double meaning only understandable for the time: “We pluck the lemons, you get the plums” (being lemons negative and plums positive). Fortunately, the explanatory paragraph finally clarifies that what they want to highlight is the rigorous German method of reviewing the cars they produce, which ensures that the final customer receives his impeccable new car with maximum guarantees. The image is one of those discarded in that quality control.

The car in question is nothing more and nothing less than the unmistakable “beetle” of Volkswagen, who does not know it today?

At the time, it was a small and rounded German model trying to open the market in the United States, in front of the elongated and rectangular American cars of the moment.

The announcement seemed to breach any marketing premise of the time. The picture did not highlight any part or technical characteristic of the car (you could not see the doors or the trunk open), it did not show to which audience it was directed (there was no smiling person next to him, nor a family inside), there was no scenario in which to fit it (parked in front of a house, on a street in a city, on a beach …) and, above all, the phrases of the campaign were full of irony, did it make fun of the potential consumers, of the competitors?

Presumably, all these breaches of the manual are what cause the contempt of a publicist towards another creator. Is it just envy or is there something else? During the scene of the series we see how not all the publicists of the group think the same, and how there are those who recognize themselves in admiration of the novelty. It is clear that the campaign has achieved its purpose, to be talked about.

Both the car and the advertisement were, and are still recognized in their respective sectors, as breakthrough and innovative in their time, changed the previously established trends and even started new times for the automotive industry and advertising, and that is what should be highlighted. The merit as creator goes to Bill Bernbach and the agency was DDB.

“Logic and excess analysis can immobilize and sterilize an idea. It’s like in love: as soon as it is analyzed, it disappears”. Bill Bernbach

And so it is that innovation is sometimes difficult to fit into the traditional operation of the company and the danger of being disparaged or, worse, rejected, exists. It is a challenge, then, to know how to communicate it to the rest of the company and, although the consultants can help a lot, it’s the leaders of the organization who must “lead by example”, promoting new ideas, facilitating differentiation and originality and incorporating them into the corporate culture.

“An important idea not communicated persuasively is equivalent to not having any idea”.

With all the elements analyzed, we invite you to enjoy the full scene of Mad Men
(chapter 3, season 1):

Fran Chuan, speaker, trainer, entrepreneur and promoter of the culture of innovation.
With more than two books on the market, Innovation 2.0 and Authenticity, among others, Fran works with the management teams of companies, both in strategic design and teaching workshops, to include a culture of innovation in the leadership style, strategy and DNA of corporate culture.